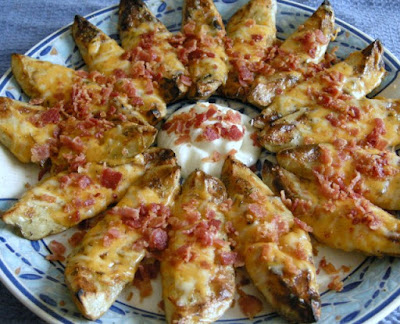 I have a million potato recipes.   We like them all kinds of ways.   I've done potatoes on the grill before, but always in a packet or a grill pan.   I saw this recipe on TOH while poking around one day and put it straight on the to-try list.

There's a few steps involved, but overall if you've got things laid out it all comes together fast.   I didn't get out a ruler when I cut the excess off the potatoes, but I'm sure I left a little more than 1/4", so I microwaved mine the full 10 mins.    I browned the bacon while waiting for the potatoes to come out of the microwave.   The butter mixture comes together in just a few mins.

When I go out to eat, I will often get an appetizer as my meal...  This fits that bill perfectly.   The crisp skin and the fluffy potato, topped with melty cheese, crispy bacon, and a dollop of sour cream.    I did intend on swapping the green onions out for chives, and then totally forgot.    :)

Get those grills going and give this one a try! 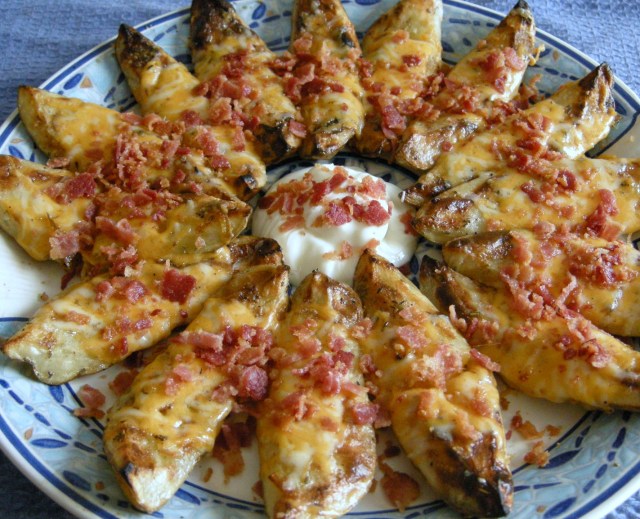 Cut each potato lengthwise into four wedges. Cut away the white
portion, leaving 1/4 in. on the potato skins. Place skins on a
microwave-safe plate. Microwave, uncovered, on high for 8-10 minutes
or until tender. Combine the butter, rosemary, salt and pepper;
brush over both sides of potato skins.
Grill potatoes, skin side up, uncovered, over direct medium heat for
2-3 minutes or until lightly browned. Turn potatoes and position
over indirect heat; grill 2 minutes longer. Top with cheese. Cover
and grill 2-3 minutes longer or until cheese is melted. Sprinkle
with bacon and onions. Serve with sour cream.
Yield: 8 appetizers
Source: https://www.tasteofhome.com/recipes/grilled-potato-skins/
grilled, potato, bacon
Appetizers, potatoes, grilling
American
Created using The Recipes Generator