First attempt at gnocchi today, Tim had asked for it a few weeks ago and rather than buy it premade I wanted to try it from scratch, even though I am a notoriously bad dough maker   :)    Carol gave me a T&T recipe, which I proceeded to massacre, but they still turned out good enough that I'll definitely give it another go.

Tim has an unnatural hatred of instant mashed potatoes, so I mixed up that part before he got up for the day and hid the box back in the closet.   LOL    My flour had sit for a long time and I should have shaken the canister before scooping, which was my mistake #1.     The dough came together and I rested it and portioned it out and rolled it on the fork and they looked lovely  :)

Tossed them into boiling water, had my sauce all heated through and was just waiting for them to float when the phone rang.     Jake's school- and I hate to not pick up in case it's an emergency and by time I got back off the phone, the gnocchi were floating.   How long they'd been floating, I'm not sure.    That was mistake #2.

They tasted fantastic, I added a sprinkle of parsley and crushed red pepper flakes at the end, would have done a little shredded parm but was all out.    The texture was just a bit chewy, either from the flour or the overcooking.

I apologize to Carol for killing her recipe, but will definitely try them again!   :)  Thanks so much for sharing it with me! 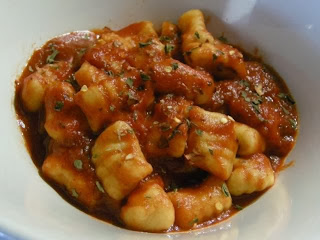 Knead until smooth. (I stir in what flour I can then knead in the rest-I do it the same way as when I make bread-add the flour gradually and use enough to make a soft dough that doesn't stick to my hands or the board). Cover dough (I use an overturned glass bowl) for 15 minutes.

On a lightly floured surface, pinch off pieces of dough and roll into ropes about 1/2" in diameter (keep dough not in use covered so it won't dry out); cut off pieces about 1" long. You can either roll each piece across the tines of a fork or a cheese grater, or what I do is push lightly against each piece with my thumb and roll it away from me, to sort of fold it. If you do it quick, the dough will "flip" and fold...that seems quicker than rolling each piece on the fork-to me anyway. Repeat with remaining dough.

To cook immediately, place gnocchi in rapidly boiling salted water and cook until they float to the top-stir right after you drop them in the water to prevent sticking. (I always taste one to make sure they're cooked). Drain and top with your favorite sauce.