July 29, 2015
The farms are bursting with zucchini and summer squash right now.   Usually I'm in with both feet, making zucchini breads and muffins, some to eat, some to freeze, but the heat and humidity have reached ridiculous numbers again at the moment.    I found myself with 2 nice zucchini, an ingredient challenge and a pin for these waffles sent to me by my friend Sue.

On zucchini prep-  I did not shred, salt, rinse, then press water out of the zucchini.  Instead, I peeled and shredded it, and put it in a mesh strainer over another bowl yesterday morning.   In the afternoon, lots of liquid had collected at the bottom, and I dumped it out.   Then I pressed the daylights out of it with a paper towel.     Peeling had nothing to do with liquid reduction, it was more about hoping I could get my son to eat some of the waffles, and the green peels are a dead giveaway.

I really enjoyed these, they were crisp, cheesy.   I did add some extra salt and pepper at the table, and the next time I make them I'm going to add some additional herbs and spices.    Thanks to Nicholas Day for sharing his adaptation of Daniel Shumski's recipe.  And if you haven't heard of the Will it Waffle? blog, go check it out, he put some pretty fantastic things into waffle form.    :) 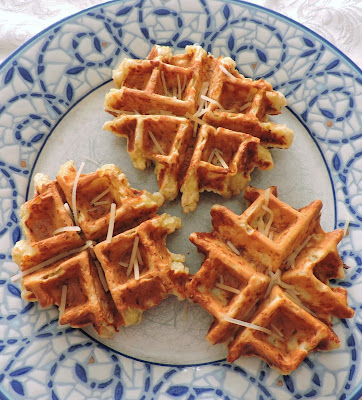 Place peeled, shredded zucchini in a mesh strainer over a bowl.   Allow to sit for several hours.  Pour out liquid, then press down on surface of the zucchini with paper towels.

Heat your waffle iron.   Turn the oven on at a low temp if you need to keep the waffles warm while you make the rest of the batch.

Whisk together the egg, milk and 1/4 cup parmesan cheese.    In another bowl, combine the flour, 1/4 t each salt and pepper.   Add the flour mixture to the egg mixture, then add in the zucchini.   Mix until well combined.

Spray the surface of the waffle iron with nonstick spray.   Place 2 to 3 tablespoons of batter onto the center of the iron.  Close the lid and cook about 3 to 5 minutes, until browned and cooked through.   (I have the Presto Flipside iron- I put the mixture in, and then flipped it according to the instructions.)

Remove and keep warm in the oven while you cook the remaining waffles.    Serve with an additional sprinkle of salt, pepper and Parmesan cheese.