August 03, 2015
My son is entering a weird phase.   Some days he has a bottomless pit for a stomach, others he eats like a bird.   Tacos are one of his favorite meals, but I'm having a rough time judging how much meat to make.    Last time around was one of his "peckish" days, and I had a good cup of taco meat leftover.  I let it cool, stuck it in a bag in the freezer.   When I menu planned for this week, I saw this recipe in my to-try file.    Perfect!

Since my taco meat was already cooked, I added just a little more water to it so it wouldn't dry out.   I am not a huge fan of cilantro, but I do like the dried much more than the fresh, so I used that.     I personally would like a little heat next time around, I think I will also add some diced jalapeno to the taco mixture.    Huge thanks to Christy at The Girl Who Ate Everything for the recipe  :) 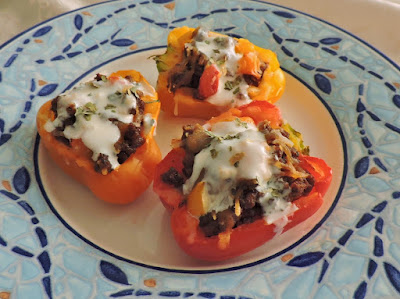 Heat oven to 350.   Combine taco meat with a few tablespoons of water.

Cut about 1/3 of the pepper off longways,and set aside.   Using a spoon, scrape out the membrane and seeds.    Set the peppers on a baking sheet.    Dice up the reserved peppers and stir into the taco meat.

Fill the peppers with taco mixture, but don't pack it too tightly.    Bake for 15 to 17 minutes.   Top with cheese and then bake for another few minutes until the cheese melts.

Combine the sour cream, cilantro, garlic and lime juice.   Spoon over the top of the peppers. 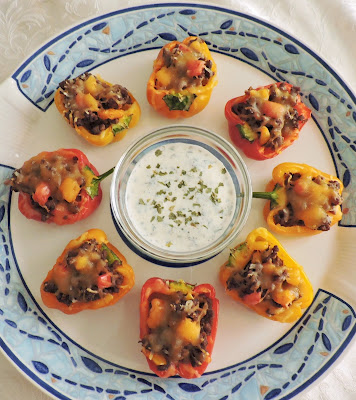