July 29, 2016
About halfway through summer, and the guys have been getting bored with my usual hotdog/brat/kielbasa presentations.    I've had some Jack Daniels in the fridge for a while, so I decided to give this recipe a try.

My skewers have gone missing, so I knew that I'd be doing this as a skillet meal.   I also planned to serve it over rice, so I wanted the veggies smaller than 1".   Neither of them eat vegetables, and I don't do mushrooms.   I had yellow, orange and red bell peppers, so I cut half of each into large dice, as well as half an onion.  I upped the sugar slightly, to 4T, they like marinades on the sweeter side.    I used Johnsonville Beef Brats, which are fully cooked, and it made this meal super fast to cook.    Everything went into a ziptop bag and then the fridge for 1 hour.

I heated a skillet to medium and then added the brats/veggies to it.  I kept it moving so that things browned, but did not burn.  I added about 1 to 2T of the marinade and made sure everything was well coated.     It only took about 10 minutes for the brats to be browned and the veggies crisp/tender.

Totally complaint free dinner, which is rare around here.   I loved the sweetness of the veggies balanced against the marinade.  It went perfectly with rice.   It would also be fantastic in rolls.   Thank you Mary L for this fantastic recipe! 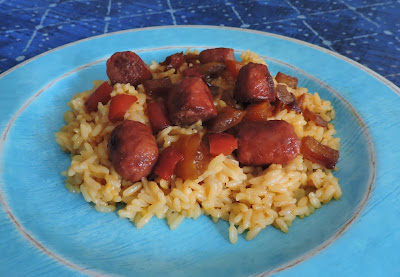 In a large resealable plastic bag, combine the first five ingredients. Add the vegetables and brats; seal bag and turn to coat. Refrigerate for at least 1 hour.

Drain and reserve marinade. Heat a skillet to medium, add brats and veggies.   Cook, stirring for 2 to 3 minutes.  Add 1 to 2 T of reserved marinade.   Repeat, until brats are browned and veggies are crisp/tender, about 10 minutes.

Serve over rice, if desired.