October 02, 2016
I ordered this sandwich at a local chain restaurant a while back.   It was so good, I got it the next time I visited too.    I found myself craving it, when no trip to the restaurant was happening, so I decided to recreate it at home.

I put together the barbecue sauce based on the ingredients that I saw online on the Fireball website. Though I liked the homemade version, I'll be buying a bottle from the site for instant gratification purposes.    I assembled the sandwich just like at the restaurant- bread, cheddar, ranch, chicken, bacon, barbecue sauce, cheddar, bread.   Butter the top slice of bread, flip it buttered side down onto the griddle, then butter the other side.   Cook until golden brown and delicious. 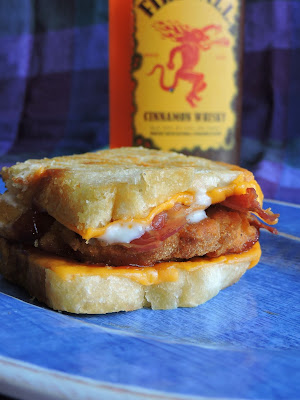 Preheat skillet to medium. Top 2 slices of bread with cheddar cheese. Spoon 1T of ranch dressing on each. Add 2 slices bacon. Cut chicken tenders, if needed to fit on bread. Top with 1 to 2T Cinnamon Whiskey BBQ Sauce. Add other 2 slices of cheese and top with remaining bread. Coat the bread with butter and place buttered side down on skillet. Butter top slice of bread. Cook until golden brown and cheese is melted. Yield: serves 2

Combine all ingredients in a large sauce pan and bring to a boil. Reduce heat to a simmer and cook for an additional 15 to 20 minutes, stirring occasionally. Move to jar or squeeze bottle and store in refrigerator.

Submitted to Taste Of Home magazine